Lewy body dementia, or LBD, is a condition many people don’t know about until it strikes someone they know.
It’s not uncommon for people to mistake LBD for one of two more well-known conditions, Parkinson’s disease or Alzheimer’s disease. While LBD does have similarities to both diseases, it is unique, differing from each of them in significant ways. LBD and Parkinson’s are similar in that they both impact nerve cells located in the brain and are progressive diseases. Symptoms of both diseases start out mild and gradually worsen as time goes on. Neither disease can be diagnosed using a single test. Instead, diagnosis typically involves a series of tests to rule other problems out. LBD causes problems with movement that resemble those caused by Parkinson’s disease, such as muscle rigidity and tremors, which is where the confusion between the two often comes in.

Alzheimer’s is well known because it is the most common cause of dementia, affecting more than 5 million people in the United States. LBD is the second most common but affects far fewer people at 1.3 million Americans. The two diseases are similar in that both affect the senior’s abilities to think, pay attention, and their alertness. Both diseases can also cause hallucinations.

The primary difference between the two is that the symptoms of LBD, including memory problems, can vary from day-to-day. On one day, the senior may not remember your name and the next she will know who you are and be able to identify other family members, too. With Alzheimer’s disease, the symptoms can vary a bit, but not to the degree that they do with LBD. Typically, Alzheimer’s causes a steady decline in memory and cognitive abilities.

If you or an aging loved-one are considering hiring Elderly Care in Bala Cynwyd, PA, please contact the friendly staff at Suma Home Care.
Call today: (484) 206-4544 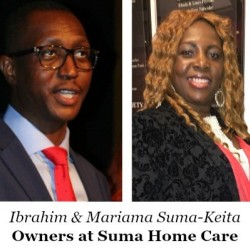 Owners at Suma Home Care
Ibrahim Suma-Keita Jr studied lived, studied and work in London, United Kingdom when he emigrated as a teenager from his country of birth Sierra Leone. Ibrahim had a illustrious career in Information Technology (IT). However, he emigrated to Philadelphia, where he settled and married to his wife who is a Registered Nurse, they have three children together.

Ibrahim recently completed a Professional Certificate in Management; He is currently pursuing a Masters in Business Administrations (MBA) at a prestigious university in the UK.

With their passion for helping others and a strong background in customer services and clinical care, Ibrahim and his wife started assisting individuals in their homes.

Since started and operating Suma Home Care in 2010 in the basement of their home, Suma Home Care has provided professionals who work endlessly in providing clients with the highest quality of care, while enabling clients to maintain dignity, comfort and safety in their homes.

Suma Home Care, serves four counties in Pennsylvania, Delaware, Chester, Montgomery and Philadelphia. Ibrahim is firmly connected to his local community and is always looking for ways to give back whenever the opportunity presents itself.

Ibrahim enjoys spending time with his wife and children, travelling and enjoys sports.

Mariama Suma-Keita BSN RN
Born in Sierra Leone west Africa, relocated to America in 1999 from a civil war and settled since in the U.S.A as a Naturalized citizen Graduated from National school of nursing with an associate , and completed BSN in Nursing from Immaculata University graduated with Honor roll Alpha Lambda sigma, After escaping the war served as a refugee nurse in Gambia and Guinea to other displaced refugees before coming to America.

In the states started in Homecare then then transition into hospital, worked in Jefferson hospital as a Registered nurse on Tele and general medsurg floor, also worked in Einstein hospital as an oncology transplant nurse , I realized that I enjoy working with patients so much and believe in quality and compassionate care one at a time dealing with an holistic approach in caring for patients and family in a familiar environment called home , I see the impact and progress when they’re home , it makes them feel relax and progress fast with recovering at home. As a nurse and entrepreneur I understand that dedication to meeting people and families needs is a priority, and able to foster relationships with family and patients that is professional and friendly to help them stay and settled home as a desire.